I always find odds and ends at the beach every Summer & I usually just throw them in a glass jar I have on the patio, or in the garage to dry out.  Couple years ago I made a wind chime with some caps I had collected, and I used a "Super Bowl" Aluminum Bud Light bottle.  I called it the "Hangover"...They make very little noise & and of course made from beer caps!    Recently I decided I wanted to make some more!  So I hit my local Ice House once a week or so & they graciously give me enough to work with (I leave a tip of course)!  I now have a whole series of "Hangover" wind chimes.  Here are some photos and their history. 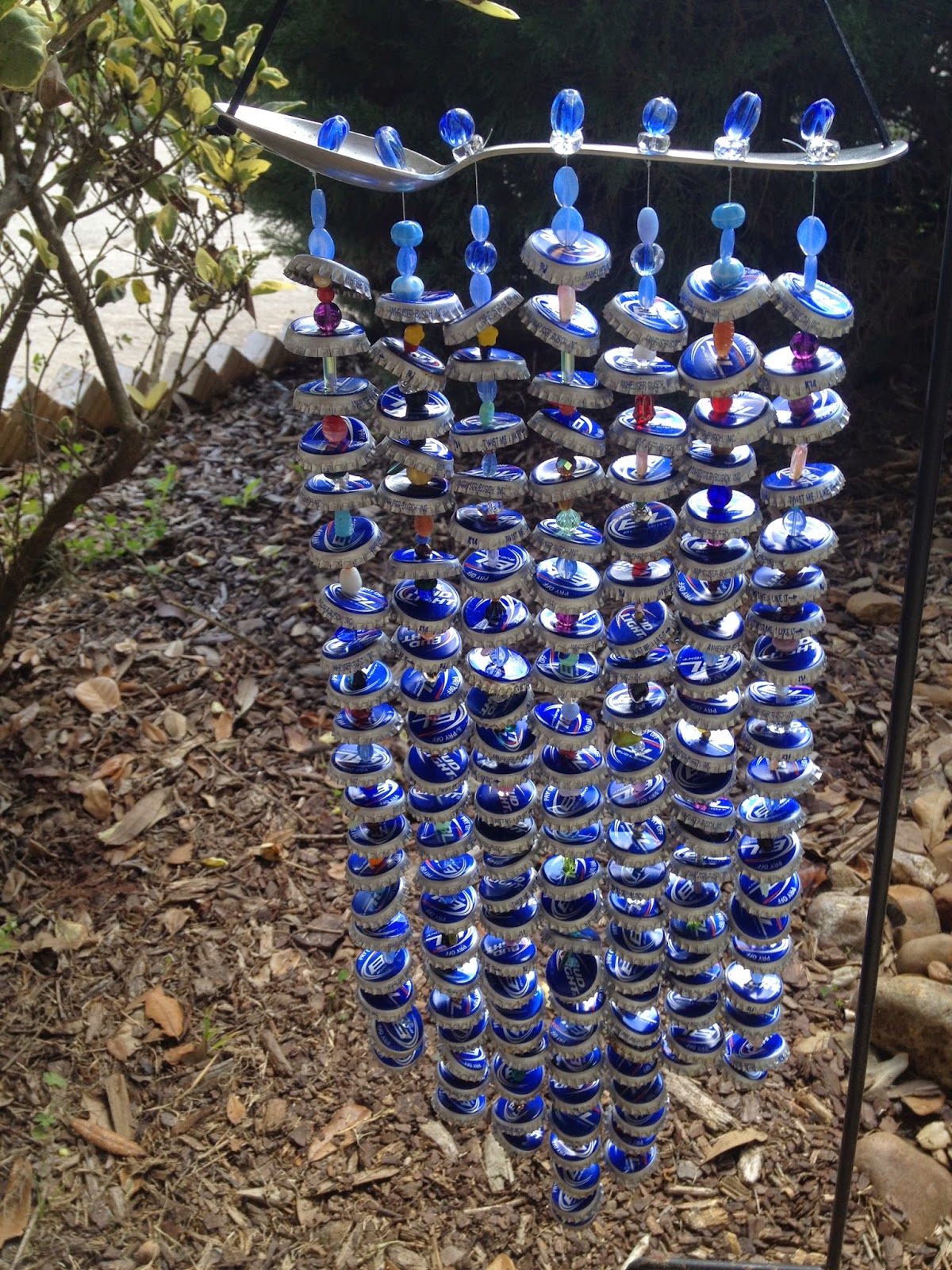 This one is called "Beach Spoon".  I found the spoon on the beach two years ago!  Jack helped me drill the holes in the spoon & I set out stringing beads and caps!  I used glass beads on this one.  When hanging in a window the light reflects the glass and gives it a nice sparkle of color.  This on is 21" long and hangs 27" with the strap.  She is very heavy!! 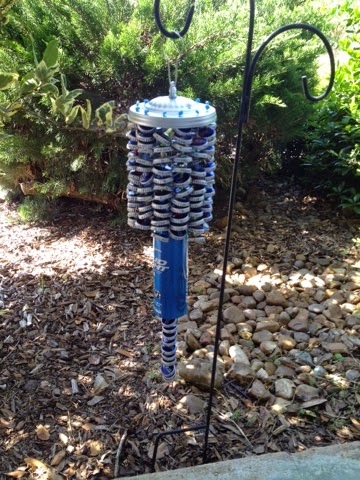 This one is called "Giant Super Bowl Hangover #2"  I had cut the bottom of this bottle back when I was making "Giant Super Bowl Hangover" and did not like the results...so I put it up and forgot about it!  I ran across the aluminum bottle the other day and thought....hmmm let me think about this!  I found a fan cap my Mom had given me for what ever reason & now I found myself holding these two pieces!  First I spray painted the fan cap a baby-ish blue...YUK!  I pulled the silver out and we were in business.  This one also has the glass beads between the caps.  Explanation for the name "Giant Super Bowl Hangover" is explained below!! 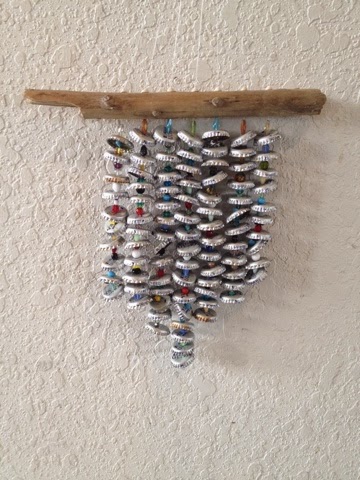 "Drift Wood Micky"  I picked this piece of wood up last year at the beach and stuck it in the garage to dry!  Last week I ran across it and knew what I wanted to do!  I used Michelob Ultra caps, thus the name Micky!  Michelob Ultra caps rust really badly by the way!!  Not sure why, but if you are working with this product..Keep that in the back of your mind!!  I also used glass beads between the caps. I found an old pukka shell necklace, not sure if they are plastic or real, but I used them to hold the fishing line at the top of the drift wood.  I was going to use leather as a strap (and I drilled the holes for that) but I decided I like how the fishing line held the wind chime.  Now I need to either make two more strands or just leave it for a leather strap later. 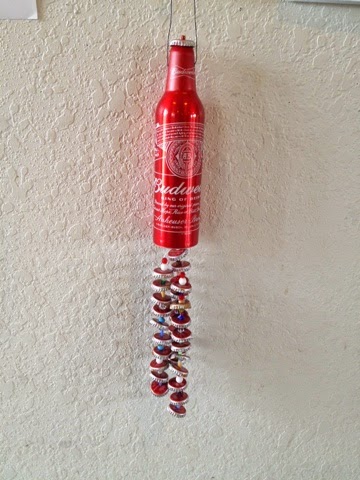 "Big Bud Red"  I wanted to make the girls at the Ice House a wind chime, since they collect the caps for me!  I came across this Budweiser Aluminum bottle the other day on the golf course and quickly grab it before it hit the recycle bin.  I love the red!  "Big Red Bud" has three strands of caps and glass beads! She is a beauty and probably my favorite!  I just love red! 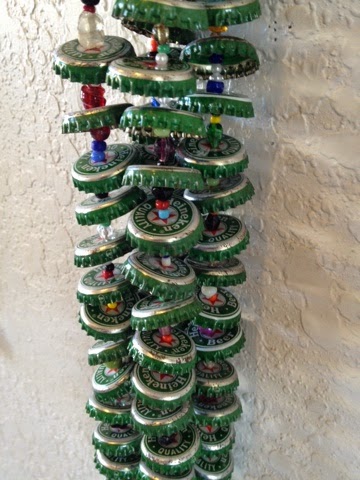 "Key to my heart #2"  I love Heineken beer!  It really is about the only beer I will drink!  I came across two red pepper aluminum lids that I had saved (hoarded, but that's another story...hee hee).  I dug out the hein-y caps and went to work.  I had a stash of keys that I used on the bottom of each strand.  I also used glass beads between the caps on this project.  This one has four strands and "Key to My Heart #1" only has two strands of caps and beads. 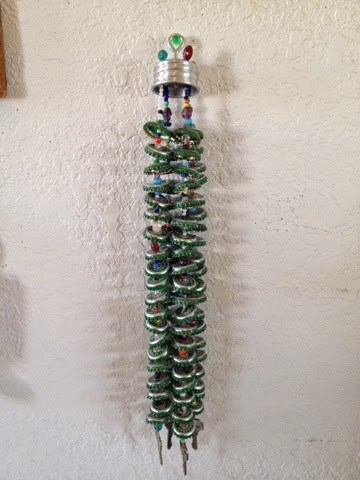 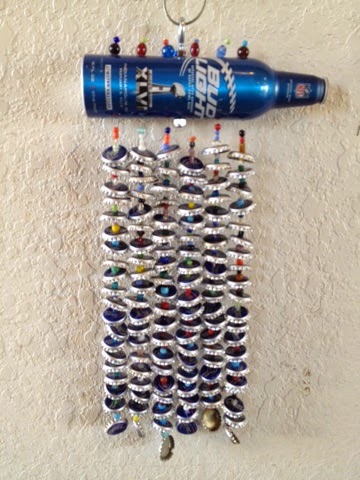 "Giant Super Bowl Hangover"  The first beer cap wind chime I made! Read the story here.... On my Blod dated February 2012.   lemonbeanandthings.blogspot.com/2012/02/bud-light-wind-chime-homage-to-super.html
I used plastic beads on this one. 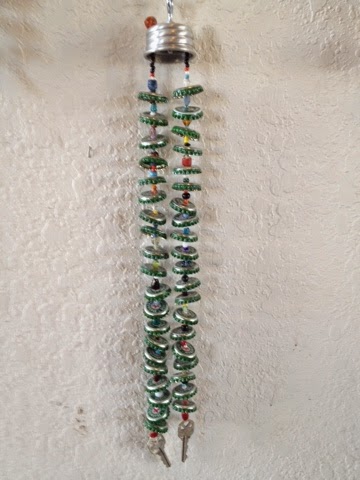 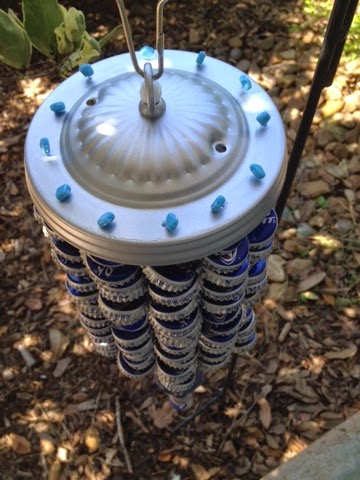 "Giant Super Bowl Hangover#2"  This shot is the lid.  I drilled the holes in the lid and scratched it, so I had to spray paint it!  I think the silver worked out very well!  Still trying to get the ugly baby blue out from my finger nails!  Urghh.. 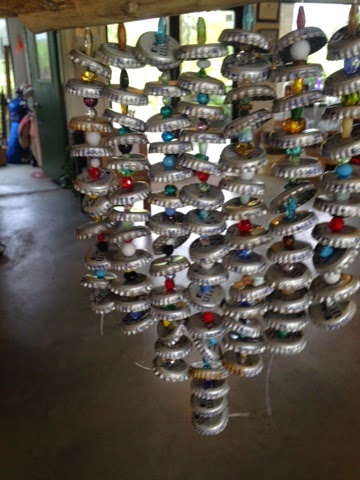 "Drift Wood Micky" This shot is of the beads and caps.  I have trimmed the extra fishing line!  Again you can see how rusty the Michelob Ultra caps are!  But hey...Rust is the new gold!! 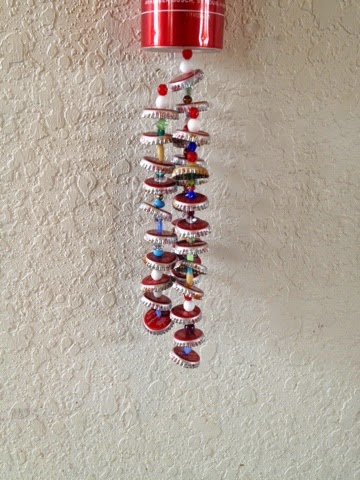 "Big Red Bud" another shot of the caps 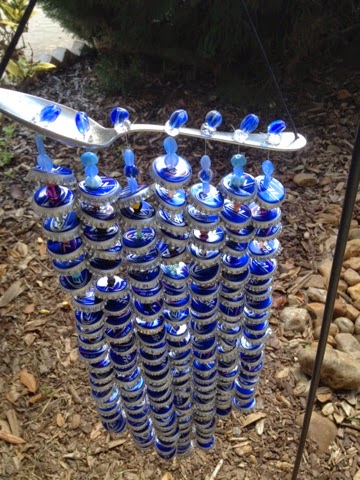 "Beach Spoon"  Shot of the top. 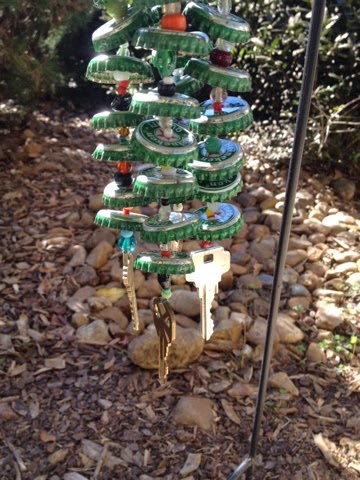 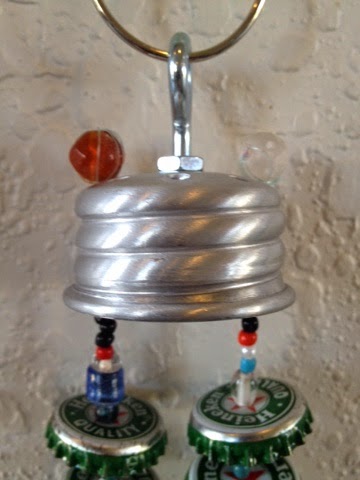 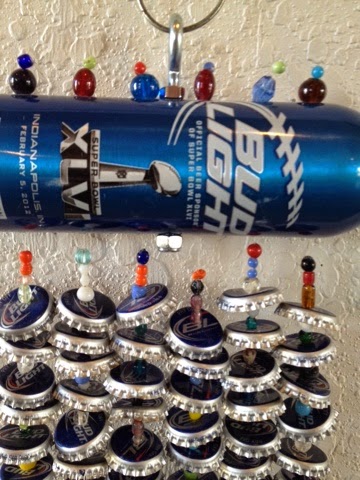 "Giant Super Bowl Hangover" Close up of the beads!

I do not recommend any of my wind chimes be placed out side!  They deserve a spot in a window or in a "Man-Cave"! I would be so afraid the wind would ruin them, not to mention again about the rust!  Thanks for looking & thanks for "Pinning"!  Now.... off to find some more stuff!!